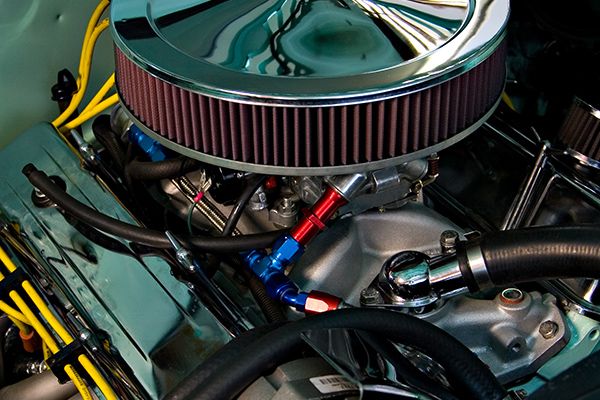 Many successful auto racers are turning to cryogenic engine treatments for longer lasting, better performing parts. Cryogenics is one of the secret tricks many top engine builders use to gain improved horsepower and reliability. This process works regardless of the engine metals. Whether it is aluminum on aluminum, a cast iron sleeve in an aluminum block or steel involved. It is not very expensive, considering the money that's at stake. It's an investment returned many times over in saved labor and new parts costs. Cryogenics may be the most exciting yet least understood performance enhancement available today.

Why should you use motorsport cryogenics? 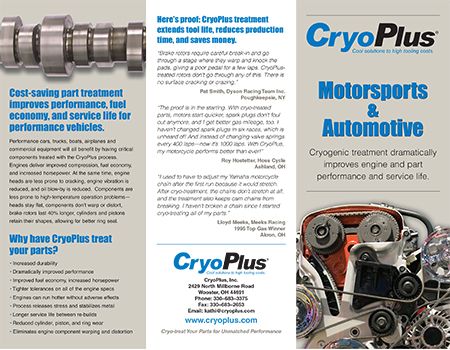 “Brake rotors usually require careful break in and go through a stage where they warp and knock the pads giving a poor pedal for a few laps. Cryo treated rotors don't go through any of this. There is no surface cracking or crazing”

“The sprocket we had treated two years has lasted longer than any we've had in service that were untreated and the wear surfaces are visibly different when compared to the untreated sprockets. Each year we compete in an endurance race in which the chain drive system is the weakest link of the vehicle (racing go-kart). Drive sprocket failures are common in this race and the treated sprocket we used not only lasted that race but has been in occasional service for two years since with very little wear.”

“I used to have to adjust my Yamaha motorcycle chain after the first run because it would stretch. After cryo-treatment, the chains don't stretch at all, and the treatment also keeps cam chains from breaking. I haven't broken a chain since I started cryo-treating all of my parts.”

“The proof is in the starting. With cryo-treated parts, motors start quicker, spark plugs don't foul out anymore, and I get better gas mileage, too. I haven't changed spark plugs in six races, which is unheard of! And instead of changing valve springs every 400 laps—now it's 1000 laps. With CryoPlus, my motorcycle performs better than ever!”

“Not only did (my 1996 Suzuki GSX-R 1100 motor) surpass my expectations, it blew them out of the water. I noticed improvements in compression, fuel economy, engine vibration and transmission shifting. I can't wait to freeze everything I own.”

“I was extremely skeptical... and after you had treated it, we were stunned by the results. While engine wear was as expected, greatly reduced, we had not expected the significant performance improvements. Needless to say, we have now had all our in-house engines cryogenically treated and have encouraged many of our customers to invest in this as well. You folks are really on to something real. My only regret is that this is one speed secret that won't take long to get out.”

“Cryo treated Chevy heads are not prone to crack, even at 240° F compared with untreated heads.”

“We ran more than 40 races... between lower engine teardowns. Before Cryo-Processing, we had to tear down after every six to seven events.”

“This really has to be one of the greatest improvements ever for the racing community. Cryogenic treatment of the motorcycle and mini-sprint engines I build have given me many improvements... Most engine builders tear down 2-cycles after 300 laps"... "I recently tore down a 250 2-cycle after 1,800 laps and found that I could measure no cylinder wear, no ring wear and only 1/1000th piston wear... The engines I have had Cryo-treated at CryoPlus have consistently out performed identical non-treated engines.”

“The drag racing applications... are numerous and can be of great benefit to racers who are on a tight budget. Even the aluminum aftermarket engine blocks used by professional racers can be treated cryogenically.”

“The combination of our 1300 H.P. blown big block Chevy and automatic transmission with cryo-treated planetaries has turned out to be a great combination. We made about 30 passes (4 passes are the average) with no breakage, including a wheel standing run with the front wheels four feet up in the air.”

“I was skeptical of the process... After I got the motor back from you, it was rebuilt, and much to my surprise and delight produced approximately 10 percent more power across the power band... More motors are on the way.”

“We are able to turn the wick up and run at a hotter temperature without any adverse effect... We would never race again without Cryogenic treated engines.”

“We generally go through the motors after 1,000 - 1,200 laps. When we tore this engine down at that point the bearings were almost perfect and the crank looked like the day I installed it new.”

“I recently had my Yamaha KT motor put through the Cryogenic process. What a difference. Prior to the treatment, I ran a head temp of 360-380 degrees. He (my engine builder) was amazed that I could turn 14,000+ RPMs and head temps of 460° F + and still not melt the motor. Can't wait 'till the next race! I'm sure there will be some heads turn when we go on the track.”