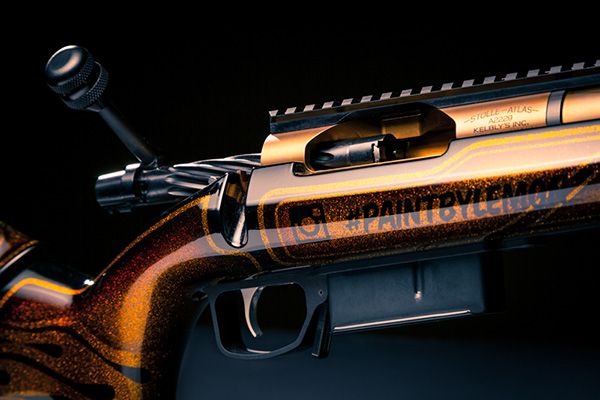 Residual stresses exist in rifle barrels from the original steel forming or forging operations and additionally as a result of the many different machining operations to finish the barrel. They create a complex invisible random pattern in the steel. A steel barrel expands from the heat generated by firing a round, and stress impedes expansion. The steel barrel will then warp randomly off axis, as it is heated from sequential firings. Residual stress will therefore cause a barrel to progressively "warp an arc" as it heats more from each round fired. A barrel placed in a vise and fired repeatedly will show a resulting arc of round placement at the target. No two barrels are the same. The effect has a memory and will continue group after group of shots fired. The "loose cannon effect" is measured in microns at the barrel end, but the multiple of distance to the target amplifies the problem causing wide groups or patterns. The problem is not a crooked barrel, but one which moves on repeated firing. Residual stresses are uneven and located variously throughout the structure. Deep cryo treatment of metal is acknowledged as an exceptionally effective method for decreasing residual stress. It also increases the durability or "wear life" of steels.

Wind, temperature, vibration and personal skill are enough variable to keep you busy. A moving barrel should not be part of the equation.

Cryo-Processing extends barrel life 200 to 400 percent and enhances accuracy. The practice of taking barrels off and putting them aside after only 2000 to 3000 rounds has become a thing of the past! New barrels and the costs associated with chambering are significant...and have a tendency to tie equipment up for extended periods of time.

The process will anneal the metal and condition the springs in the trigger. The release and set points will not change and wearing surfaces will be minimized in a cryo treated trigger assembly.

Cryo-Processing will change the way you approach the task of keeping a "gilt-edge" barrel on your rifle throughout the hunting and competitive shooting seasons. It will provide dimensional stabilization, less copper fouling and improve grain restructuring thus eliminating copper collecting inclusions.

Our one-time, permanent Cryo-Processing application costs only $100.00 plus $25.00 (for shipping and $500 insurance) for rifle barrels and $70 plus $20 for handguns and revolvers. This is a very attractive alternative to buying new barrels and having them chambered more frequently than necessary!

Benelli USA recently incorporated cryogenically treated barrels and choke tubes to their line of shotguns. See what they have to say about the cryogenic treatment. http://www.benelliusa.com/crio-system